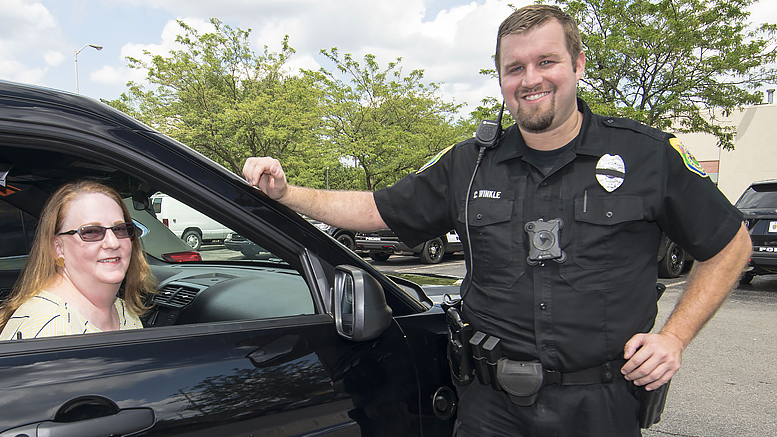 We don’t have time for community policing. We need to focus our resources on real police work!

My last few years of police work have been interesting, rewarding, and even extremely challenging at times. I’ve always had a passion for helping people. I love to network and that carried into my law enforcement career. I rarely miss the opportunity to meet someone new, or to carry on a conversation with a complete stranger. Yes, I’m the guy that can have a fifteen-minute conversation with a complete stranger, in line, at the grocery store.

I grew up in a police family. As a child, I idolized street cops. Although I spent a lot of time around administrators, detectives, and undercover cops, the uniform officer was my hero. Becoming a police officer was obviously my childhood dream. Today, there’s no job I’d rather do. Being in a police car feels natural to me. It’s a place I enjoy. My style of police work is proactive. I stop a lot of cars, make a lot of contacts, and in turn find myself in a lot of action.

Between 2016 and 2017 I hit a lot of PR home runs for the police department. We launched a campaign to purchase four new police K-9 units. The goal was $60,000. I remember in the beginning, that was a terrifying number. I reached out to a contact at Fox59 News to do a teaser story on our campaign. A two to three-minute story and our first dog was fully funded by a private funder. Next, we started a social media campaign. Essentially, we wanted these dogs to be funded by the community. If our city felt that the dogs were important then they would step up to the plate and help us purchase them. We planned community events, such as the Dogtoberfest, a play on Oktoberfest. The community could join us for a day of fun, beer, and bring their dogs. It was a huge hit! Our final move was to have five of our officers compete against one another in raising funds. What did the winner get? Well, the winner would be hit with the Taser in front of an anxious audience. A little twisted, right? It worked. We raised nearly $5,000 in three hours. In addition to the money raised, this particular fundraiser was a social media sensation. The officers made memes explaining why other officers were more deserving of the Taser’s pain. The community had a lot of fun and so did the officers. We even received hate mail from across the country telling us that the campaign was “barbaric” and begging our chief to cancel it. He didn’t.

Our next social media win came with weekly officer bios on the department Facebook page. We’d share life experience, department successes, and even funny stories from each of our officers. The bios each contained information that the community would have otherwise never known. I had a chance to poke a joke at one of my co-workers who had been single my entire career. I named him “Muncie Police Department’s Most Eligible Bachelor.” The community had a lot of fun with his bio. The officer told me he even received some date offers. He’s still single.

Finally, I opened my passenger seat to community leaders in early 2017. The riders ranged from local plumbers, ministers, city council members, sorority sisters, and leaders of local not-for-profits. All and all, I had over 80 community leaders join me on patrol. Each of the ride-alongs would conclude with a less than perfect selfie in the police car. It’s really hard to take a good selfie in the police car! These terrible police car selfies became easily identifiable on Facebook and LinkedIn. The best part about the many riders was the perspective they gained on what police work was like.

During this same time period, I was doing a lot of “real police work,” too. I had seen my fair share of drug arrests, fights, foot chases and car chases. With real police work, comes complaints. Everyone thinks they’re innocent, right? In 2018 social media went from being a blessing to a curse. I woke up one morning to a plethora of text messages, Facebook messages, and updates. A video of one of my arrests had went viral on Facebook. It was labeled as if I had beat an innocent man without cause. At the time, it felt like the end of the world. I received a lot of hate messages from around the country. Messages that called me things like “coward,” “pig,” and even told me to take my own life. A little drastic, don’t you think? I took a small hiatus from social media (two weeks, to be exact). I returned and eased back into the social media realm. When I returned, I was amazed by the many messages, comments, and tags from members of my community. They were reminding me of the support I had and the good things I had accomplished. It was refreshing. I received calls and texts from many of the 80+ community members who had spent time with me on patrol. Many of them expressed the idea that they had seen me do police work first-hand and they were confident in my decision making and style of police work.

Still, I began to question: Can you focus on community relations and aggressive police work simultaneously? The answer is…YES! What I found from my personal experience is, your community wants both. Most members of your community will support you. They want you to be out in your community enforcing laws and removing criminals from their streets. If a criminal runs, they expect you to chase him. If a criminal fights, they want you to win! They also want to see the positive interactions between police and the community. They want to help their police departments. They want learn about and meet the officers working in their neighborhoods. The criminals and their friends? Well, they’re not going to support you, regardless of what you do!